“With its clubs for recreation, its coffee and doughnuts in the forward areas… (with) the devotion and warmhearted sympathy of the Red Cross girl.. The Red Cross has often seemed to be the friendly hand of this nation, reaching across the sea to sustain its fighting men.”- Allied Commander Dwight D. Eisenhower, 1945

It never fails. During the first week in June, the line at the stop light is greeted by smiling men or women with pocketed vests. They shake a cardboard doughnut on a string, seeking a donation.  “To what?” I ask myself, while forking over a dollar.

Now I know.  It is National Doughnut Day, which began in 1938 as a fundraiser for Chicago’s Salvation Army. Currently, either the Salvation Army or the Red Cross sends volunteers to the street to collect support for their humanitarian causes. A quick history helped me dig a bit deeper into the pocket book.

The simple ring-shaped piece of fried dough helped to shape history. Introduced to the “Doughboys” in WWI by the Salvation Army “Doughnut Girls”, coffee and carbs symbolized loving concern for those in the armed forces. Helen Purviance, an Ensign in the Salvation Army, worked in France with the American First Division. She is credited with inventing the treat.  “I was literally on my knees when those first doughnuts were fried, seven at a time, in a small frypan. There was also a prayer in my heart that somehow this home touch would do more for those who ate the doughnuts than satisfy a physical hunger.” Eventually, Ensign Purviance and her girls would make up to 9,000 doughnuts daily, as did other Salvation Army lassies along the frontline trenches. Their tour of duty enveloped a view of WWI through the hole of a doughnut.  They were soldiers without guns.

The soldiers dubbed the Salvation Army lassies as “doughnut girls”. The lowly fried doughnut became a symbol of the Salvation Army’s goal to ease the hardships of the frontline fighting man: free refreshments, religious services, concerts and a clothes-mending service. Food for the belly and sustenance for the soul. 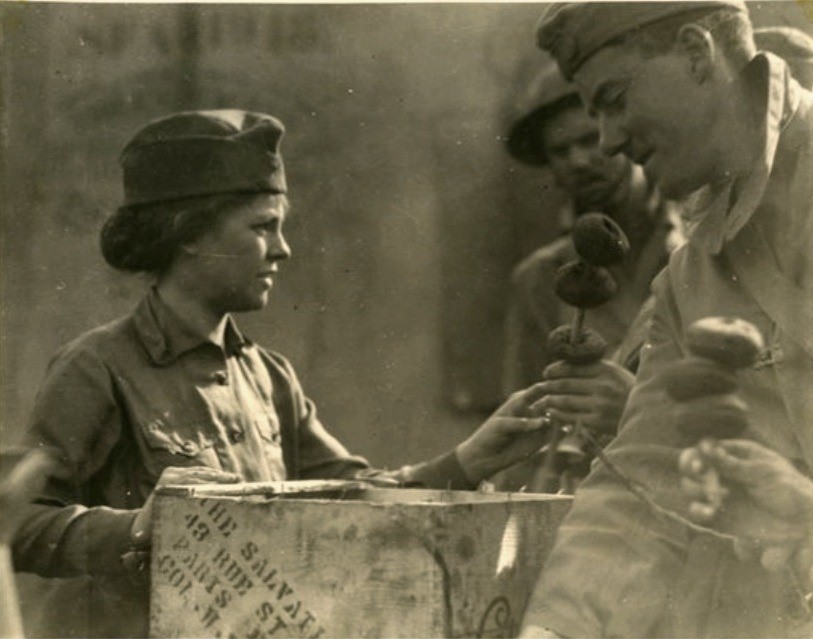 Doughnuts and the Red Cross

When the World War II  Red Cross volunteers  brought coffee and doughnuts to men in outlying areas of Europe, they touched the hearts and souls of American servicemen and women. This seemingly domestic duty  was truly a heroic endeavor. The men admitted that the Doughnut Dolly’s  “being there gave them a nice warm feeling.” That emotion inspired the uniformed pastry- makers to work ten to twelve hours a day from London’s foggy streets, to the Normandy invasion and on to Ardenne’s snowy forest. These women wanted to be with the troops, not back home waiting for them to return.

The caravan of Red Cross Doughnut Dollies followed the GI’s through most of the war’s defining moments. With 31 girls in a  group, the volunteers manned Clubmobiles, supply trucks, a Cinemobile and trailers for water, generators and tents. Each Red Cross worker could drive a 2 and a half ton truck, live in tents, work in snow and rain, while wincing only a bit at the big guns exploding in the near countryside. Still looking feminine, they could talk about tanks, airplanes and rifles as well as movies and music. Most important, they served strong, hot coffee and doughnuts that they made from scratch in the middle of a corn field.  A touch of home in a place where humanity is easily lost. 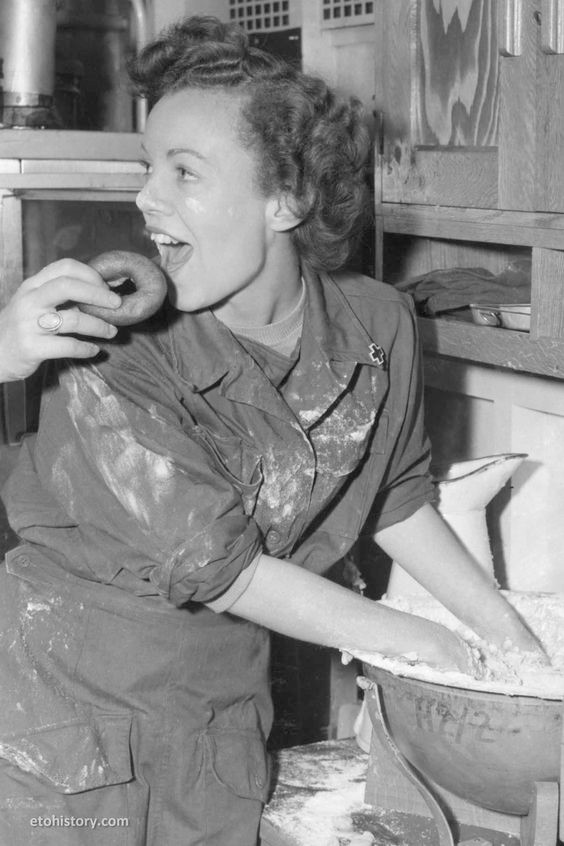 Contributing to the Future

This June, I will be alert to the orange vested volunteers walking between cars with cardboard doughnuts on a string. The Salvation Army and Red Cross represent the best that our country has to offer in the way of supporting the troops, historically and in the present day. It is a privilege to contribute to the cause.

“The front lines of the Salvation Army run through the tragedies of our world.” –-  General Arnold Brown

If it were possible, a quilt for the workers should be created and given to each one who toils by a deep fryer and a coffee machine. Maybe it would lead to sweet dreams. 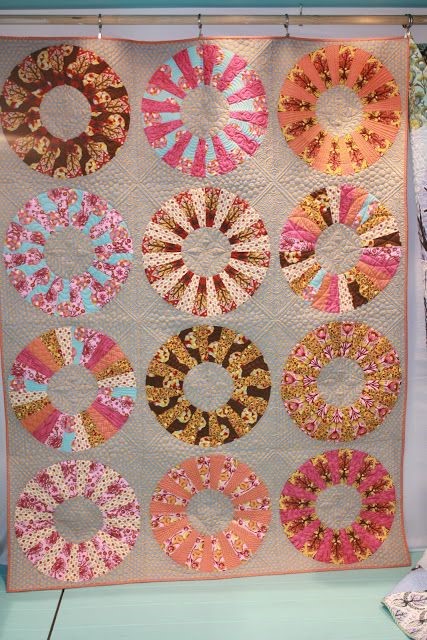