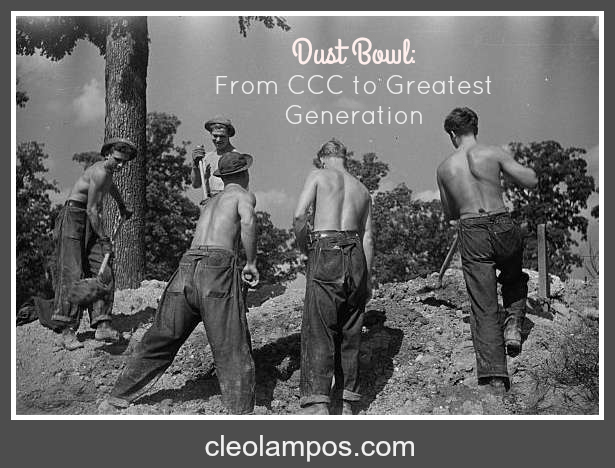 The family’s farm is in foreclosure. Dust storms blot out the sun and bury the livestock. The older siblings try to share their beans, biscuit and Jack with the younger ones who cry themselves to sleep on empty stomachs. Dad’s eyes stare blankly at the dried out landscape. Mom is quiet, her graying hair pulled into a bun. Going to school barefoot with no supplies doesn’t make sense. What’s a teenage boy to do?

Many young men turned to the opportunity for self-respect that the CCC, Civilian Conservation Corps, offered in these difficult times. Under the sponsorship of President Roosevelt, the CCC lasted from 1933 to 1942 as a public work relief program. It reached out to unemployed, unmarried men whose families were on relief. For the 17-28 year olds, the CCC represented hope. Malnourished, poorly clothed and under-educated, the young men arrived at the barrack type compounds that ran with military precision. After eating three meals a day, dressing out in new uniforms, and sleeping on a bunk, these young men gained work experience, additional education, and lots of self-confidence. Of the $30 they earned each month, $25 was sent to their families. For these recruits, helping out the folks was a privilege.

Imagine the over three million men who participated in the CCC and accomplished a legacy of production that still stands today. They worked with Henry Finnell in the Dust Bowl, learning about soil conservation and helping to teach the farmers. They built muscles by planting a windbreak on the Great Plains that stretched from Texas to Canada. They learned to operate bulldozers to level sand dunes. Their efforts were integral to Henry Finnell’s ability to implement radical conservation changes that turned around the devastation of the Dust Bowl. All across America, the CCC worked in conservation and infrastructure projects that are still used today.

The CCC ended in 1942 when the WWII started. The disciplined training and physical fitness of these workers coincided seamlessly with recruitment into the armed forces. These men who were former children of the Dust Bowl had grown up with tough exteriors that protected their inner dreams and sensitive emotions from being extinguished as they faced one disappointment after another growing up. Their childhoods were forged on the anvil of hardship by the hammer of frugality. Rising from the grit of their teen years, the CCC prepared millions of these men to take on the challenges of Nazi Germany. They stormed the beaches of Normandy, raised the flag on Iwo Jima, liberated death camps, and returned to the States.

Ready to live their lives, these men married, raised large families, built schools, led Little League teams, served on church boards, and ran for political offices. The difficulties of their childhood predisposed them for the unique legacy as a generation who were duty bound to serve others and pass on a priceless heritage of strong values. These kids of the Dust Bowl who served in the CCC became what will be forever known as The Greatest Generation.

From the Dust Bowl to CCC to WWII to Greatest Generation.  Salute. 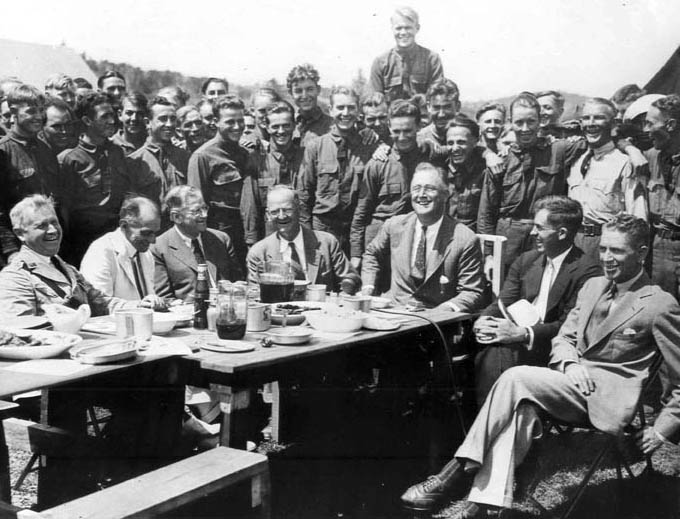 “This enterprise (CCC) is an established part of our national policy. It will conserve our precious natural resources. It will pay dividends to the present and future generations. It will make improvements in national and state domains which have been largely forgotten in the past few years of industrial development.

More important, however, than the material gains will be the moral and spiritual value of such work. The overwhelming majority of unemployed Americans, who are now walking the streets and receiving private or public relief, would infinitely preferred to work. We can take a vast army of these unemployed out into healthful surroundings. We can eliminate to some extent at least the threat that enforced idleness brings to spiritual and moral stability. It is not a panacea for all the unemployment but it is an essential step in this emergency.”  – President Franklin Delano Roosevelt