Home Cleo Thoughts Hoovervilles: The Cities of the Great Depression

Hoovervilles: The Cities of the Great Depression 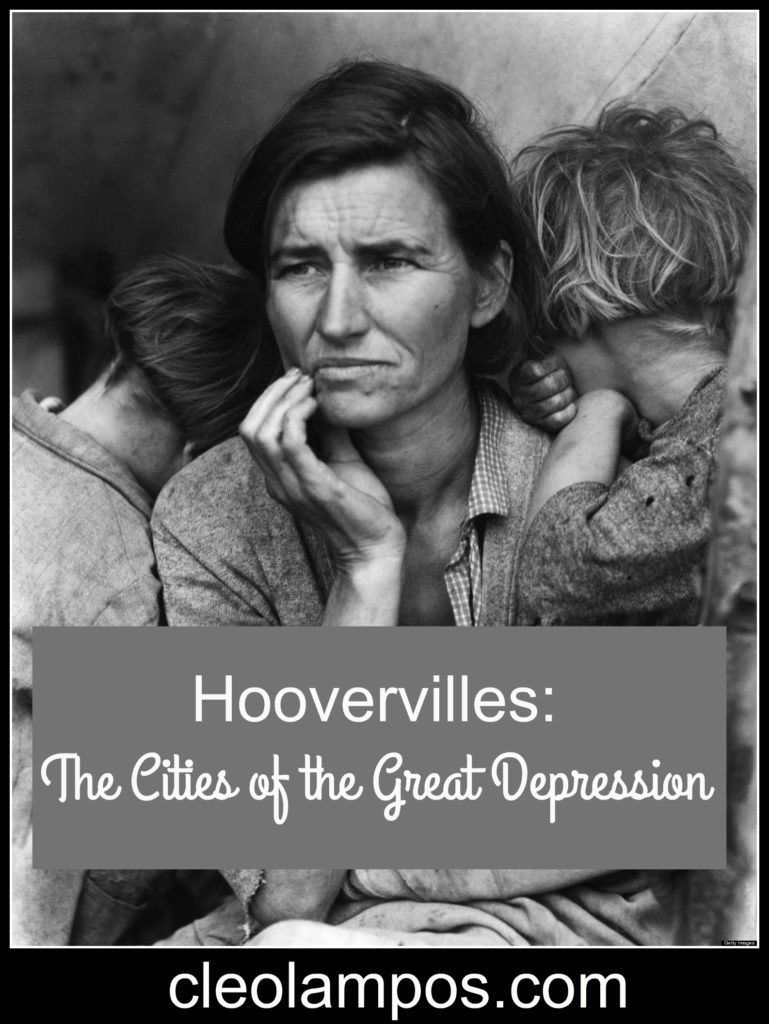 I grew up knowing about Hoovervilles because my mother made a point of telling me about them. My mother and father were married in 1930. They moved to the Great Plains where my father dug irrigation ditches and spud cellars with a dragline. A wooden trailer that hitched behind their truck became their moveable home. Everything they owned fit into what my mother dubbed “Our bungalow of dreams.” In a voice filled with emotion, she described the Hooverville near the Rocky Mountains where people lived in tents or makeshift shacks. Then she added: “Your father had a job. We had food and a place to stay.” My mother’s appreciation for humble living has affected my own journey in life by helping me to understand the old adage, “There, but for the grace of God, am I.”

Hoovervilles resulted from the massive foreclosures on families who lost their jobs and then their homes. Renters fell behind and were evicted. Relatives became overwhelmed by the number of people needing a place to live. Some families found vacant buildings to live in. Others sheltered under bridges, in culverts, empty water mains, or on unused public land. 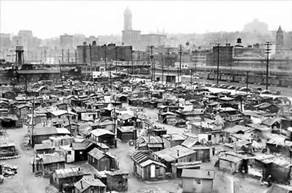 Shanty towns built by homeless families bore the name of President Hoover, who was in office at the start of the Great Depression: Hoovervilles. The shelters consisted of anything that could be found, and reflected the carpenter skills of the maker. Wooden crates, cardboard, tar paper, metal scraps, stones, and bricks served as construction material. Most occupants owned a small stove, a few pots and pans, some bedding and little else. Hoovervilles tended to be located near a water source and a soup kitchen. Many planted vegetable gardens to supplement their food intake. The adults tried to find seasonal work. There was little help from any agency.

No one knows how many hundreds of thousands of people lived in these settlements. But with 25% of the workforce, or 13 million people, out of work, it is probable that a great number of displaced families spent some time in Hoovervilles before they got back onto their feet. The residents of these makeshift cities had nowhere else to go. Public sentiments favored them, because, like my mother, everyone lived one pay check from homelessness. Even when they were torn down for unsanitary reasons, the men who carried out the government’s orders often expressed regret and guilt for their actions. Maybe because they knew the people who lived there were from the old neighborhood, or were relatives.

When I reached adulthood, mother gave me a felt pin decorated with tiny beads, stitched by a woman in a Colorado Hooverville. When I take it out of the box and look at the amazing skill used to make it, an overpowering emotion floods through me. Appreciation. For the lessons of the Dust Bowl, and for the blessings of my parents’ legacy. 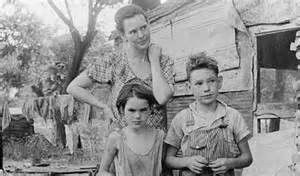 One of inspiring aspects of Hooverville was the music that the occupants gathered to create and enjoy. Many were musicians with violins, fiddles, guitars, and percussion instruments like scrub boards. They sang songs of unrequited love like “The Red River Valley.” They may have dreamt with Dorothy as they crooned, “Somewhere Over the Rainbow.” But, the songs of Gene Autry and Roy Rogers gathered all of their voices. “You Are My Sunshine” and “Happy Trails to You.” The healing of music to the spirit in the times of difficulty helped these people to make it to the better days.

An historic fiction novel, Dust Between the Stitches, describes life in the Dust Bowl as the reader traces the challenges set before Addy Meyers, a teacher in a one room school house trying to help her Grandpa stave off foreclosure. She creates a Sunbonnet Sue quilt from scraps of material left by her grandmother. Will she survive the dust storms, school board and the attention of Jess Meiners? Available as a paperback on amazon.com.

Meme photo by Dorthea Lange for the WPA.