“The US military knew that letters from home were the single biggest morale booster, and a force with high morale fights better.”  Sarah Sundin

A postage stamp is the world’s smallest contract. When it is licked and affixed onto an envelope, there is an implied promise that nothing will deter it from delivery to the addressee.

One military wife describes mail delivery from a loved one stationed overseas.
“Walking out to the mailbox just hoping to get a letter, you check through all of the mail to find an envelope addressed to you at the bottom, your face lights up and get butterflies.” Wives, mothers, girlfriends, children and others wrote to the men who had enlisted and were deployed to a foreign shore.

The average American soldier responded with six letters a week, hoping to assure loved ones that he was still alive. Each piece of mail received by that serviceman reminded him of why he was fighting. The delivery of mail to the GI’s on the front lines was critical to the outcome of WWII.

That is why the back log of mail piling up in Birmingham, England, in early 1945 propelled the government to contact Major Charity Adams, commander of The 6888th Central Postal Directory Battalion. Maj. Adams directed her 31 officers and 824 enlisted trail blazers in the monumental task of ultimately delivering 17 million pieces of mail in about eight months. 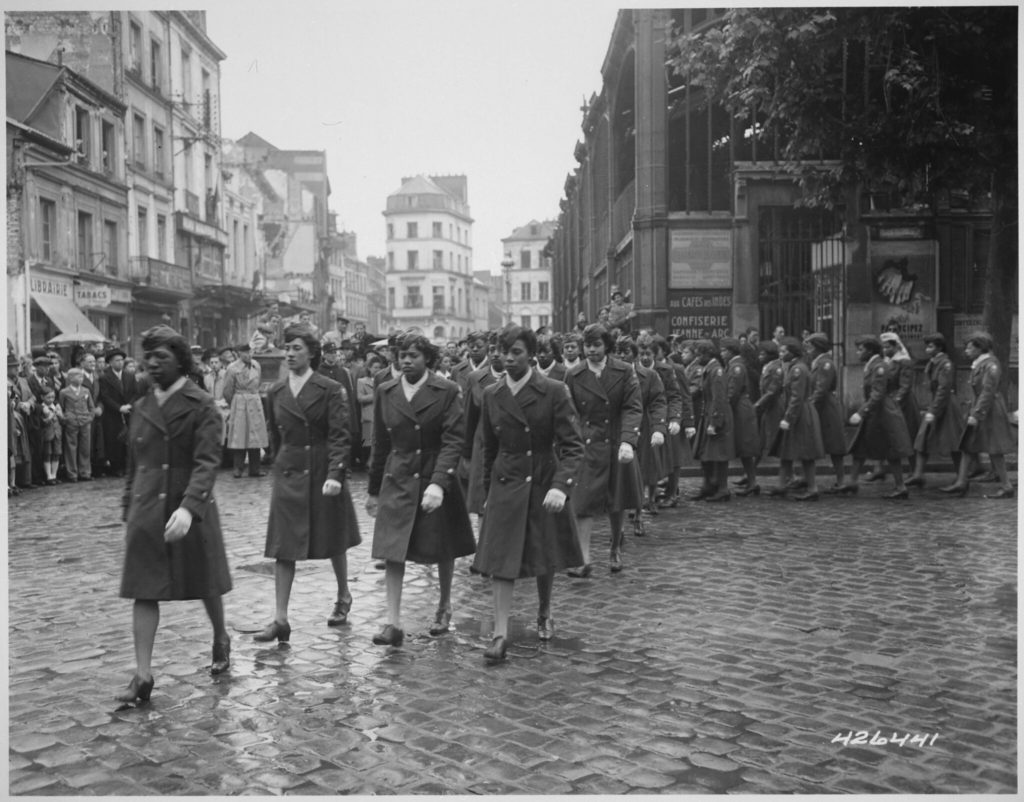 The conditions in the warehouses in England took the breath away from these qualified postal officers. Letters and packages piled up nearly to the ceiling, with bags of more mail thrown into the mix every day. The unheated buildings in the dead of winter lacked proper lighting. Black out curtains prevented any sun from brightening the gloom. Rats scurried from one package of spoiled goodies to the next. The women donned long johns and extra layers of clothing under their coats as they worked their eight hour shift. All three shifts seamlessly sorted mail for 24 hours a day, seven days a week.

For a video of the 688th Central Postal Directory Battalion sorting the mail, click here!

The women tracked the servicemen by developing cards using serial numbers to distinguish those with the same names.  Who knew there were 7,500 Robert Smiths in the military?  With persistence, these postal workers processed 65,000 pieces of mail per day, directing those marked “undeliverable”, and returning letters to families of the fallen. In three months The Six Triple Eight processed what should have taken six months.  As a reward, the government sent them to France to sort out another back log of mail.

The Six Triple Eight Postal Workers’ persistence in their task was motivated by patriotism and the desire to work as an African American team of women. Elizabeth Helm-Frazier, a retired Army master sergeant, explains.  “They did their job with dignity and respect, with dedication and commitment, even though they were faced daily with prejudices. They didn’t ask for pity. They had volunteered to come into the Army and serve their country when their country really did not serve them, knowing that when they got out they would go back to a country that discriminated against them because of their race. They didn’t get a parade. They didn’t get an award. There was no “Thank you for your service.’ But it did not despair them.”1.

The Six Triple Eight Postal Workers persisted in the tasks that they faced, and then went back home to their families. Like other GI’s, they were satisfied that they had done their part to win the war. Major Charity Adams had inspired perseverance in her troops to complete their mission of delivering mail to the troops and honoring the world’s smallest contract: the postage stamp on each item of mail.

The diligent work of these WAC enlistees should be rewarded with a postage stamp quilt.  The same type of persistence needed to sort the mail is surely required to stitch together 1,728 squares measuring 1 ½ x1 ½ which are sewn with ¼ inch seams. The result is a finished comforter consisting of 1 inch squares. The contract to finish a difficult task motivates the quilter in the exacting needlework required to stitch together such tiny pieces.

Most quilters need years to gather the small scraps of fabric in the hope that not one design will be duplicated in the finished masterpiece. Beth Chalfant Nelson owns such a quilt, stating that it is “much loved”. Her mother-in-law’s family has bequeathed it to Beth and her husband, who enjoy the memories associated with the colorful patterns. Someone worked hard to create this treasure in fabric.

Perseverance. A character quality needed in peace and in war. Visually represented by the smallest contract in the world: a postage stamp.

“Consider the postage stamp: its usefulness consists in the ability to stick to one thing until it gets done.”   Josh Billings