The Mighty Eighth: The Boomtown Bomber

“Courage is not living without fear. Courage is being scared to death and doing the right thing anyway.” –Chae Richardson 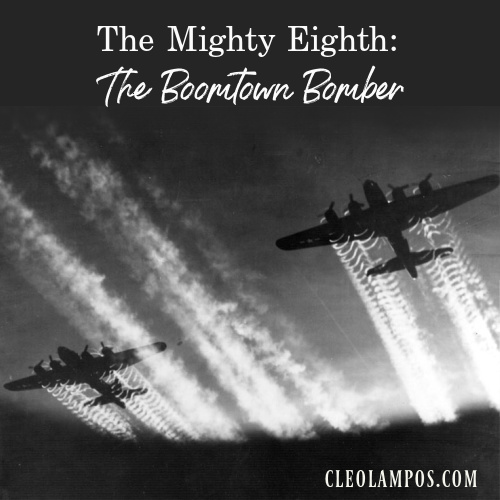 The pilot knew that things might not end well. But he forged ahead.

On December 30, 1942, Captain Clyde Walker flew his Flying Fortress over the choppy waters of the English Channel. Too close to the waves. An Oklahoma boy from Tulsa, he had commandeered the Boom Town through many strafes. But this one pressed his skills as a pilot to the limit. Captain Walker pulled his courage from deep within. He had to bring his crew back to safety. 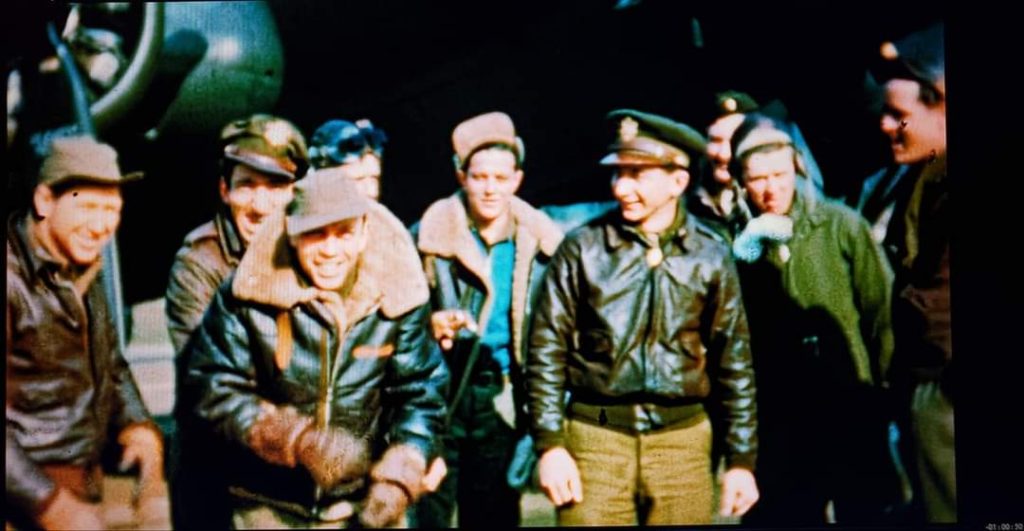 Earlier in the day, the Boom Town had joined other Flying Fortress planes over Lorient, France, giving the sub pens a taste of their .5-inch guns. The Boom Town dropped one bomb onto the subs, and the bombardier shouted “Bull’s eye!” A second later, flak tore into the Boom Town’s hull, and German fighters swooped down to attack.

That’s when the bombardier perished. The navigator, Lieutenant Smith of Ashland, Wisconsin, sustained a wound in his arm as a shell splinter passed through his jacket, knocking him off his seat. Bullets from fighters tore through the place where Smith had just been sitting. Sergeant Green, the ball-turret gunner was trapped in his space. Sergeant Krusher of Long Island was able to fight off a German plane diving toward the Boom Town. Staff Sergeant Stroud of Kansas covered the front. 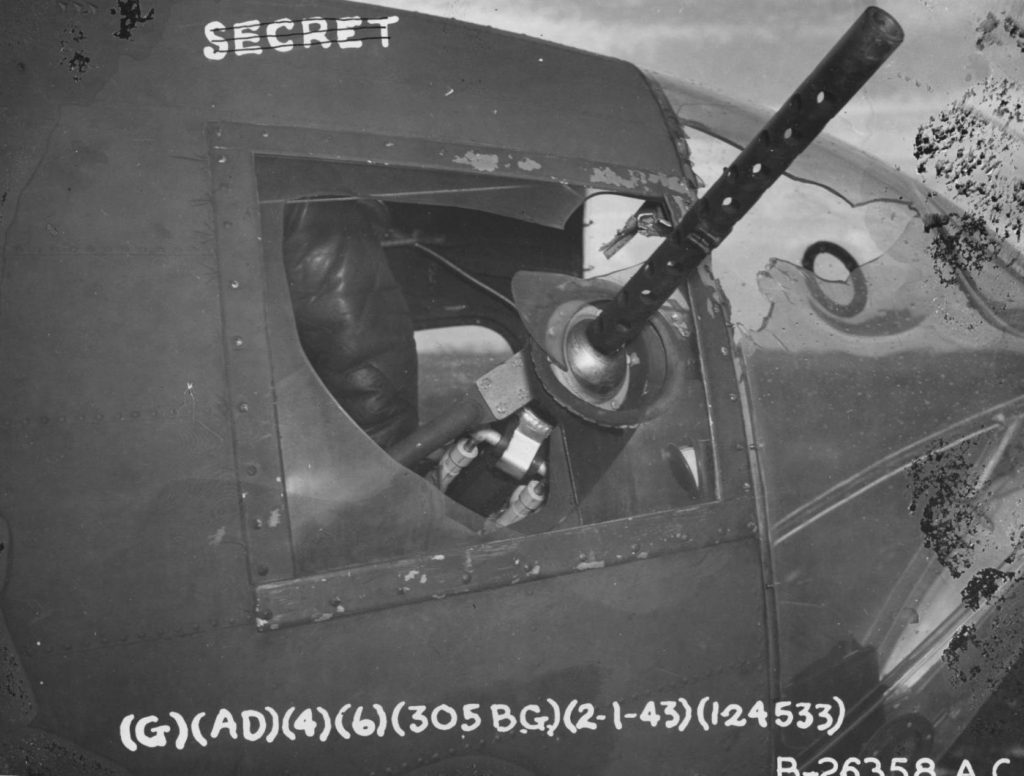 But as Captain Walker headed his plane out to sea, he realized the driving shaft of one engine had broken and another had been hit on the top cylinder, leaving emergency power only. Walker explained. “The prop would run away when I advanced it a bit.” There was a gaping hole in the nose, and the doors were shot up. The third engine sustained a dented blade. The de-icing system had been punctured, radio contact compromised, control cable knocked off the elevator.

“They missed the pilot and co-pilot”, Walker explained. “That’s all. And the co-pilot had a piece of flake in his parachute.”  The thought of baling out never lingered in his mind. 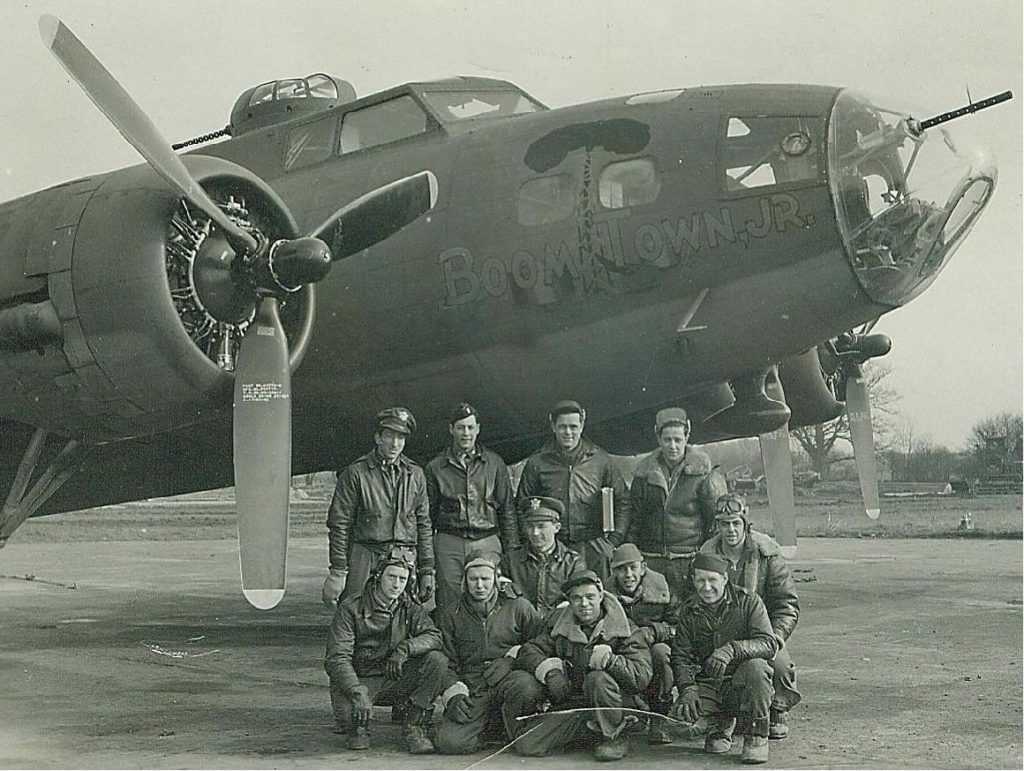 Flying out of a cloud formation, Walker realized that he was alone in the sky, dropping at a rate of 2,000 feet per minute. Amazingly, they sighted land. Looking down to see which side of the road the traffic was driving on, they spotted a bicyclist in the middle of the road.  But recognition of the town shocked them as they realized it was one of the most heavily anti-aircraft fortified cities in Nazi-occupied France.

“Then all of a sudden we saw the sub pens we’d bombed before and knew it was Brest.”  Walker guided the Fort with two engines out and a third out of control, and fuel leaking out of the city and over the water. No Nazi guns fired on them. Flying 600 feet above the English Channel, the plane’s engine sputtered. The water lapped closer to the bullet sprayed fuselage, but Walker hauled on the controls. The plane bounced off the waves, rising 100 feet into the air. The men threw everything overboard to lighten the load, and the Fortress headed for England where it made a safe landing.

Walker agreed with his crew that it felt like they had bounced off the water. But the captain believed that the bounce was from the cushion of air that formed between their wide wings and the water. Just a small fraction of less power and they would have hit the water.  Daniel Presley, a relative of Captain Walker, claims: “It was so close and rare they may have been the only WWII plane to experience that bounce.” 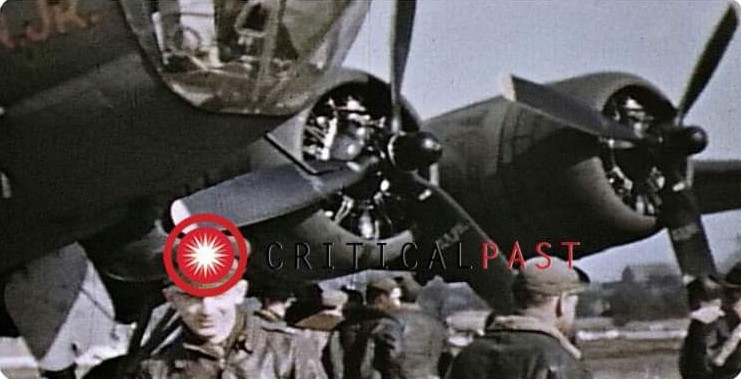 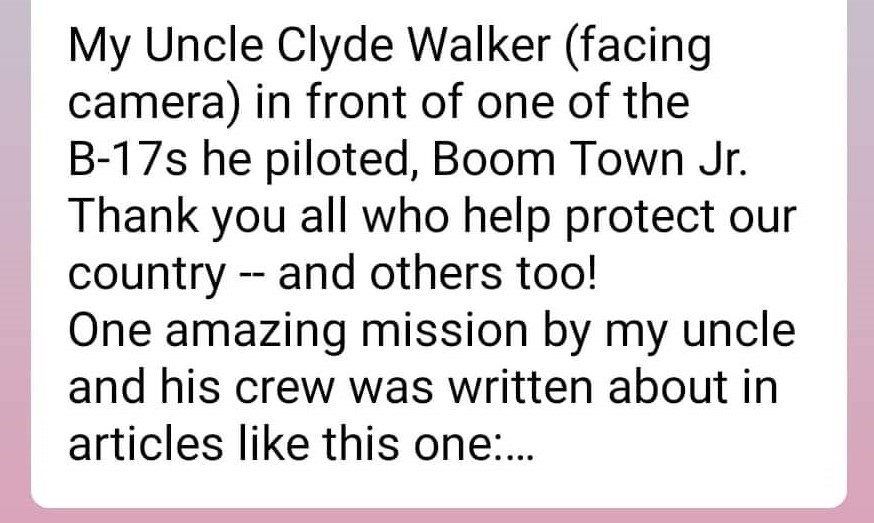 The crew landed back in England just like the icon song: “On a Wing and a Prayer”. Captain Clyde Walker of the Mighty Eighth Air Force with his Flying Fortress Boom Town.  A part of the American bomber force “that helped fight to eventual victory by decimating German industry, transport systems and breaking the Nazi war spirit.” Clyde Walker returned to civilian life in Tulsa, Oklahoma, where he lived as a patriotic citizen who proudly loved his country. 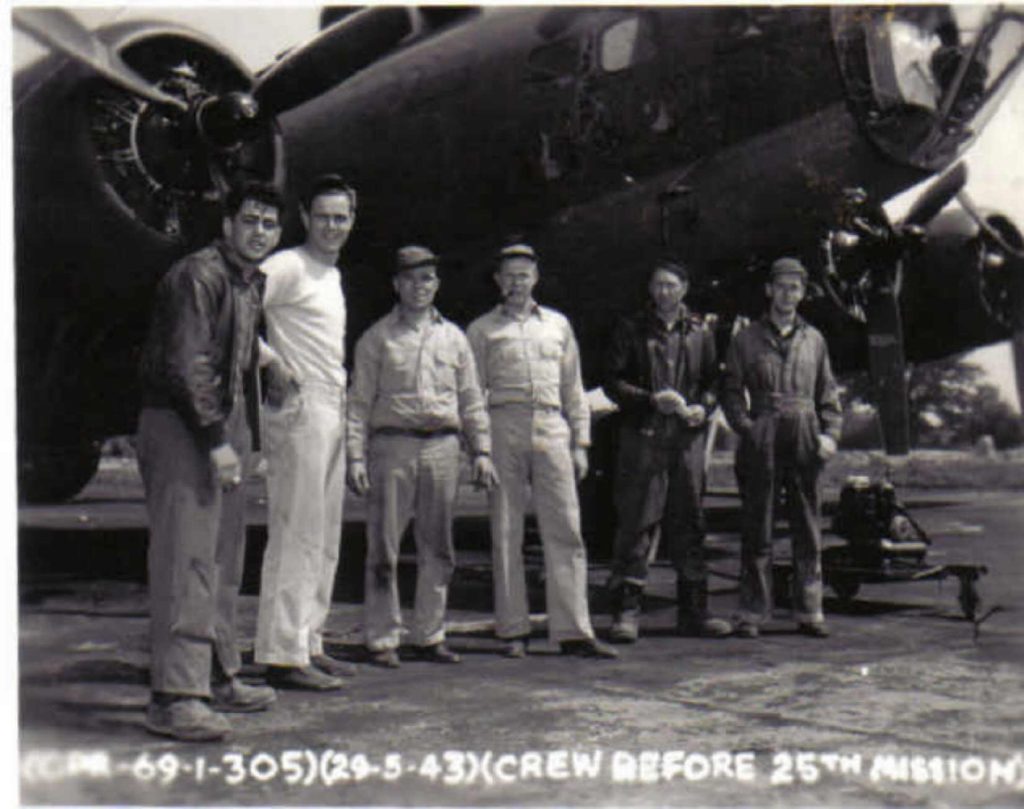 “I am so proud of my cousin, Captain Clyde Walker. He symbolizes all that the Greatest Generation has done to secure freedom for our country.” – Vernon Lampos 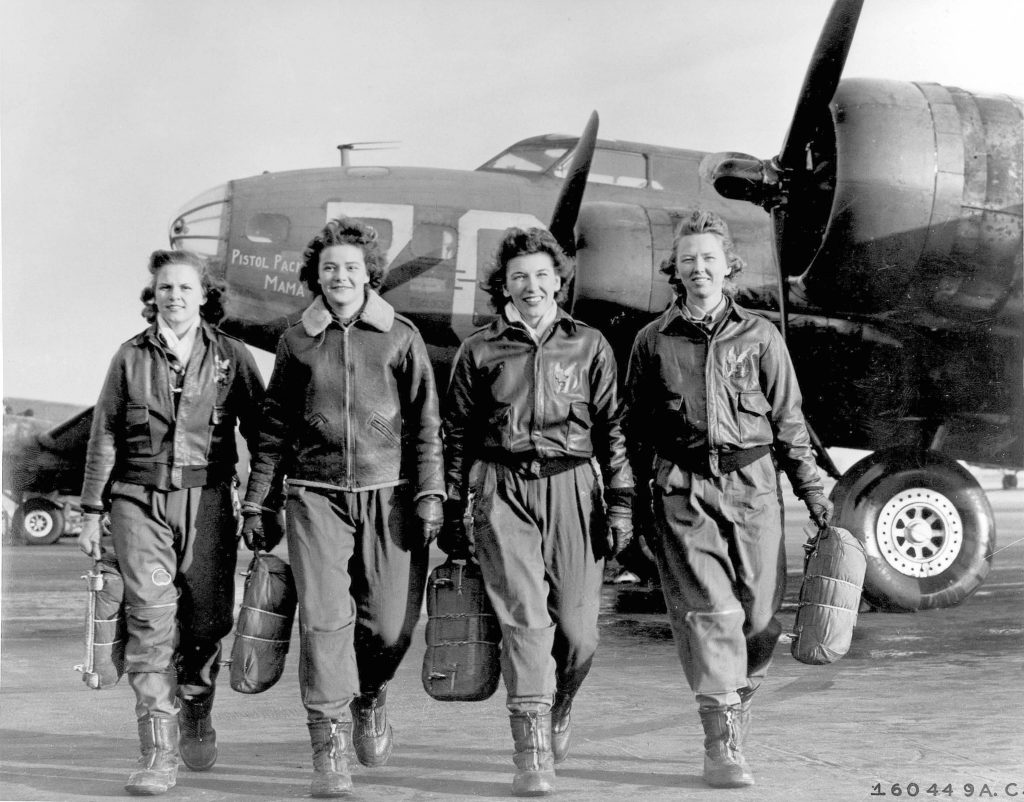 These four female pilots leaving their ship at the four engine school at Lockbourne are members of a group of WASPS who have been trained to ferry the B-17 Flying Fortresses. (U.S. Air Force photo)

The Mighty Eighth: A History of the Units, Men and Machines of the US 8th Air Force, by Roger Freeman, Cassell and Company, London, 2000.

The Mighty Eighth: The Missions, the Aircraft, the Full Story told by the Men Who Were There, by Chris McNab, MetroBooks, NY, 2017. 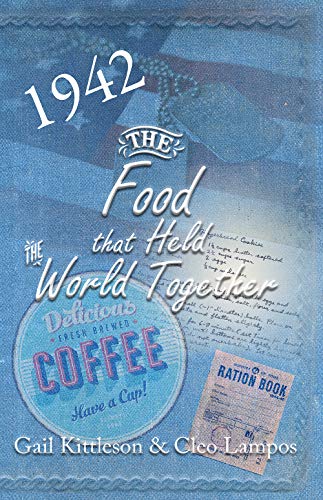 The Food that Held the World Together

Because of wartime rationing, World War II folks faced fresh challenges to feed their families. The thought of running out of food or not being able to make ends meet led to great effort-many of these citizens had not so long ago survived the hunger of the Great Depression. 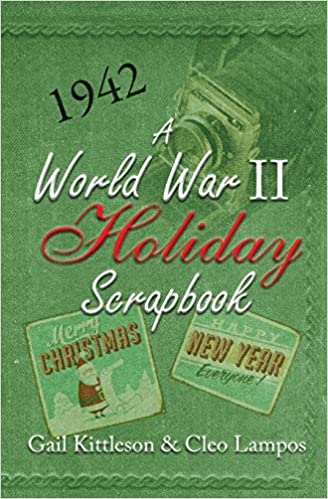 From the moment President Roosevelt announced the Pearl Harbor attack, every corner of the nation experienced change. In little towns all across this great land, families said good-bye to sons and daughters as they went off to a brutal war. Many believed that, with America’s involvement, the war would be over by the next Christmas.

Alas, this was not to be. Many families would not spend the holidays with their deployed loved ones until 1946 or ’47. As the months passed, rationing made typical gift-giving difficult if not impossible. Holiday gifts reverted to the “homemade” sort, department store Santas got a feminine make-over, and in the midst of war, communities pulled together to celebrate the birth of the Prince of Peace.

These are their stories.