Class of One – The Story of Barb and Ruby 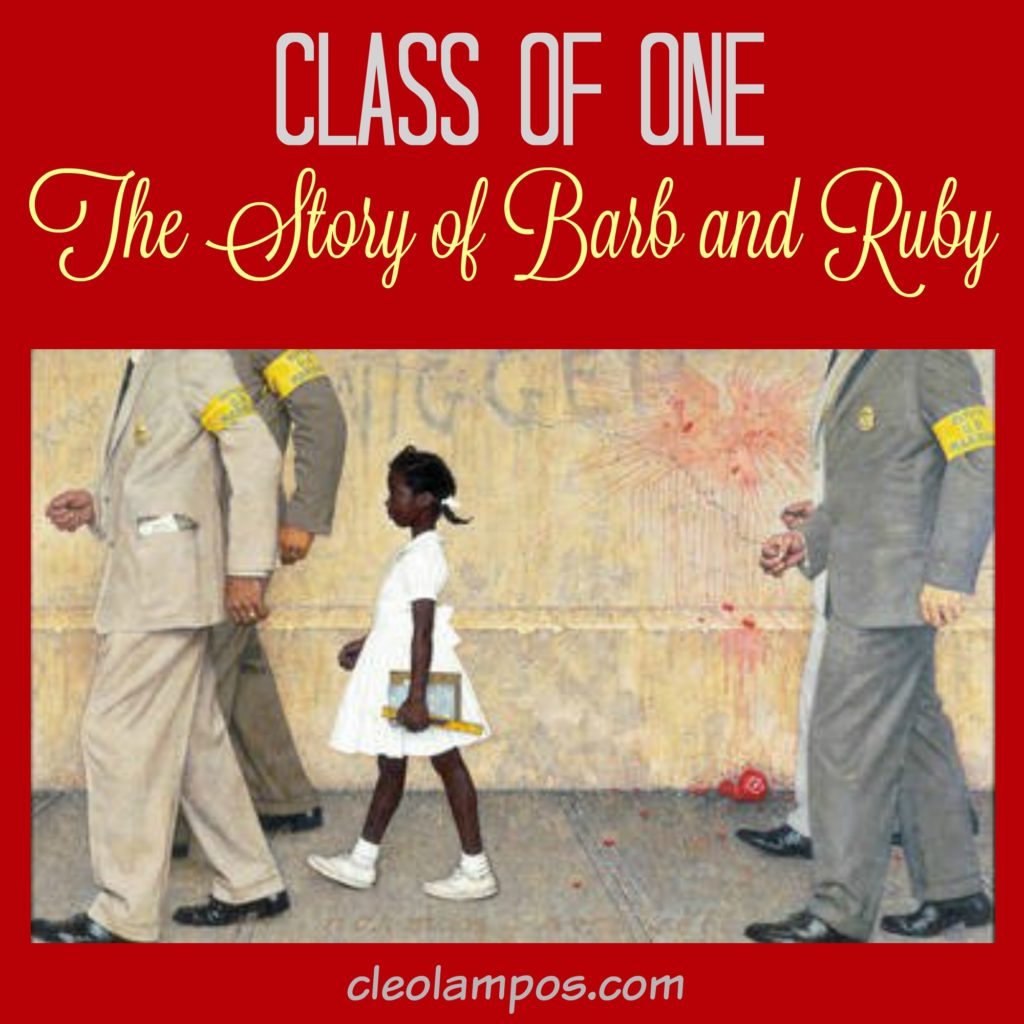 The superintendent of the New Orleans school district sat in his seat behind his desk. His offer of a teaching job for first grade at Frantz Elementary School produced only one question in Barbara Henry’s mind.

“Will the school be integrated?” she asked.

“Would that make any difference to you?” The superintendent raised his eyebrows.

Barbara thought of the years she spent in Europe, traveling and teaching. Just before moving to New Orleans with her husband two months earlier, she taught in an overseas military school which boasted of its diversity.

“No,” Barbara answered. An integrated classroom seemed natural to her.

“The police will have your name.”

The public would not. The superintendent sighed at the done deal.

Nothing prepared Barbara for the mob scene she navigated to get into Frantz Elementary School on November 14, 1960. On that day, court ordered integration of the New Orleans Public Schools officially began. Angry white parents shouted as Barbara pressed toward the entrance, a white teacher who was a newcomer to the city and its education system. As soon as the first Black student, Ruby Bridges, enrolled in the first grade, the white parents stormed the halls and took their children from Barbara’s class. She waited until the next day to meet her solitary student.

On her second morning at Frantz School, Barbara maneuvered through the growing crowd determined not to be intimidated by their chants. She realized that she sacrificed personal safety for the sake of equality. But the danger to six-year old Ruby Bridges loomed even greater. Federal marshals surrounded the child as she walked the gauntlet of the howling rabble. Barbara’s heart pounded as she watched the spectacle from her first grade classroom window.

At that moment, Barbara Henry drew courage from deep within herself for the challenge she faced as the first white teacher willing to teach an African American student in Frantz School. She continued to watch the riotous assembly as the Federal marshals pressed through the people like Moses’ march in the Red Sea. Ruby Bridges’ eyes stared straight ahead as she stepped past a woman screaming at her while holding a coffin with a black doll. Ruby never looked behind her. She kept pace with the Federal marshals’ long strides.

United States Deputy Marshall Charles Berk remarked about his daily walk with a child less than half his height. “(Ruby) showed a lot of courage. She never cried. She didn’t whimper. She just marched along like a little soldier, and we’re all very, very proud of her.”

Barbara agreed. “Ruby was a petite pioneer. How could you not fall in love with a child like her at a moment like this?” Barbara Henry’s life changed as she joined the frontlines of the Civil Rights Movement in the South in her controversial, dangerous position as a first grade teacher of one student.

The classroom became a safe haven for teacher and student. Barbara taught Ruby as though there were a full roster of children in the room. Together they played games, did jumping jacks to music, created art projects, and sang songs. Barbara read aloud stacks of books from the library. Ruby learned to read and write, then to perform basic computation in math. During that long year in the “quietly hostile environment” of the school building, Barbara and Ruby managed to carve out a place of peace. 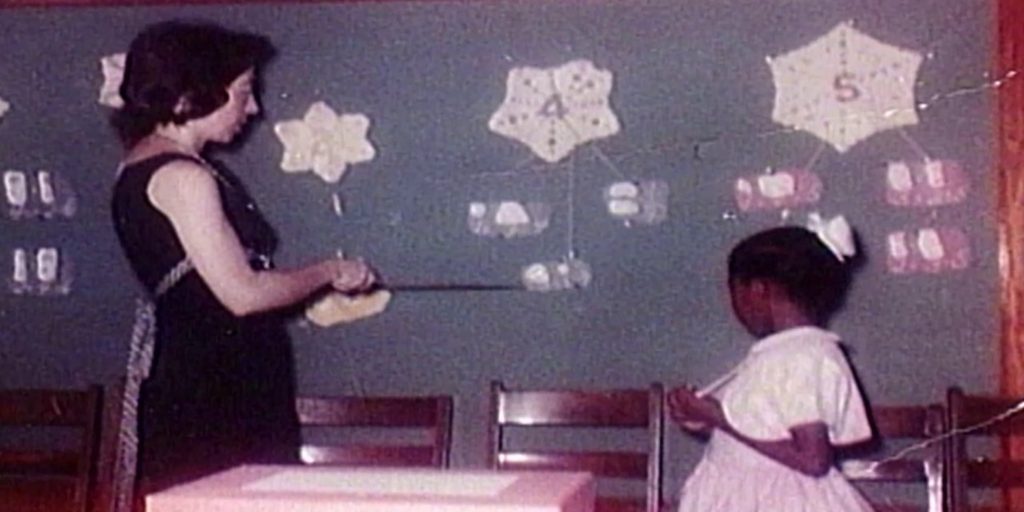 Ruby and her teacher in the classroom. Photo from Huffington Post

One morning, as Barbara watched Ruby traverse toward the school entrance, she saw the child stop right in front of the frenzied parents. Ruby faced them and seemed to be talking right to them. Barbara saw her lips moving and wondered what she could be telling her tormentors. The crowd pressed in on the stationary child, causing the marshals some anxious moments. They tried to hurry her, but she stood stationary until she stopped talking. Then they hurried to the safety of the school. Barbara heaved a sigh of relief as her heart pounded.

When Ruby settled into the classroom, Barbara asked her why she stopped and talked to the angry people. Ruby became agitated at the thought.

“I didn’t stop and talk with them.” Ruby spoke with annoyance.

“But, I saw your lips moving.”

Slowly, Ruby told Barbara that every morning she stopped a few blocks from the chaos of the crowd to say a prayer for the people who hated her. This morning, she had forgotten to pray until she was right in the center of the frenzy.

Barbara never forgot the words of the prayer that Ruby lifted to God twice a day-before and after school.

Because even if they say those bad things,

They don’t know what they’re doing.

So You could forgive them,

Just like You did those folks a long time ago

When they said terrible things about You.”

The year that Barbara Henry spent educating one child proved to be the turning point in her life. Her grit and fortitude made her a catalyst for change at a time in history when the country needed individuals to set their moral compass in the direction of compassion for others.

From then on, Barbara Henry would be known as “Ruby Bridges’s teacher.”

“Don’t follow the path. Go where there is no path and start a trail.” – Ruby Bridges

“I now know that experience comes to us for a purpose, and if we follow the guidance of the Spirit within us, we will probably find that the purpose is a good one.” – Ruby Bridges

“The arc of history is long, but it bends toward justice.” – Dr. Martin Luther King, Jr.

Do you have a story about an inspiring teacher in your life? Write to me at clampos@sbcglobal.net   I would love to learn about more teachers who care.

As a high school student, the events at Frantz Elementary School caused me to think about my beliefs and values. Of course, Ruby Bridges’s story haunted anyone who knew what was happening, but, even then, I wondered about her teacher. The day that Barbara Henry signed her teacher’s contract, her life changed forever. She never had regrets. Wouldn’t we all want to have the courage of that teacher and child? Cleo Lampos M.Ed.

Find my books at amazon.com

Teaching Diamonds in the Tough

Dust between the Stitches