Home Cleo Thoughts Henry Finnell: The Dust Storm’s Answer to “If it rain”

Henry Finnell: The Dust Storm’s Answer to “If it rain”

“The Black Blizzards were fearful.  A giant wall rolling toward you like a steamroller.” – Floyd Coen

Learning to Live in the Desert

Growing up in Oklahoma Territory in the early 1900’s, Henry Finnell learned the ways of the semi-arid land on his parents’ homestead. He graduated from the local high school in Stillwater, then earned an agronomy and erosion degree from the Oklahoma Agricultural and Mechanical College in 1917. Armed with a green thumb, Finnell became foreman of the Panhandle Experiment Station. For this gangly youth, it was his dream job. During the next seventeen years, he watched the crops fail in the Panhandle. He devised ways to utilize water more efficiently in the dry soil and pioneered methods to combat the loss of the topsoil to erosion. Methodically, he wrote reports and published articles, but his findings were ignored by the agriculture community.

Until the devastating prolonged drought of the 1930’s. 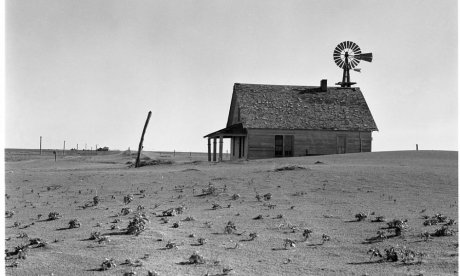 The Farmers Hope: “If it rains”

Hugh Bennett, head of the Soil Conservation Service, approached the Oklahoma soil expert whose publications had caught his eye years before. Bennett presented Finnell with the challenge of a lifetime. Live in Dalhart, the epicenter of the agricultural misery of Region Six. This area defined the drought stricken Great Plains. The code name for Finnell’s work, Operation Dustbowl, said it all. Finnell accepted the overwhelming responsibility. He worked in spite of dust storms which pounded the region, blotting out the sun for hours, piling dust hills that covered sheds, killing animals and human beings with dust pneumonia, and preventing vegetation from growing. He began by talking with any farmers who would listen to him. These suspicious workers of the land balked at Finnell’s ideas, even as the banks foreclosed on one after another acreage. Eventually the phrase, “if it rains” evaporated like a drop of water in the prairie sun as hope for recovery dwindled. 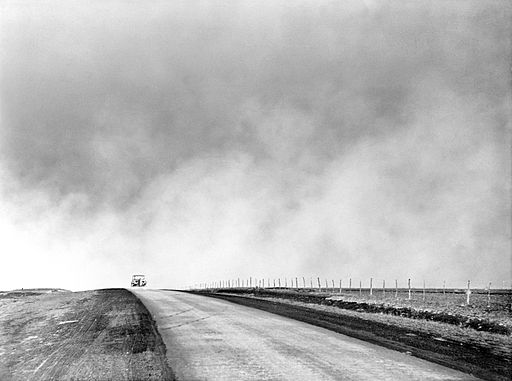 The men from the CCC Civilian Conservation Corps brought their tents to the region, and Finnell set them to work. Under Finnell’s direction, they developed thirteen demonstration projects to show farmers the new techniques that saved topsoil and water. Finnell determined which acres to turn into grassland and the CCC bulldozed the high sand dunes into flat ground. After assessing wind erosion, Finnell made a plan and the WPA Works Project Administration planted 220 million trees to create a windbreak that stretched 18,600 miles from Oklahoma to Canada. With examples by Finnell, the farmers learned to contour plow, terrace, use list plows and strip plant. Finnell showed how to capture dampness into the soil through moisture conservation. By 1938, farmers cashed in on crops where a marginal amount of rain fell. They soaked in Finnell’s advice like cool showers on parched earth. Finnell led the way to slow improvement as people regained their soul, their soil, and their lives.

For Such a Time

A kid growing up in Oklahoma Territory loving to work with soil. Experimenting with dirt. Researching farming techniques.  A vehicle from which and through which deliverance for a people was given. Henry Finnell. Born for such a time as this.

During the 1930’s, a young Chicago musician, Thomas A. Dorsey, wrote blues songs, then gospel music. His splintered life finally took a turn for happiness when his wife became pregnant. With the sudden death of his wife and new born son, grief overcame him. The Dust Bowl farmers recognized his raw emotions expressed in a blues infused song that he composed. Find the words to PRECIOUS LORD, TAKE MY HAND, and hear the cry of the farmers of the 1930s blend with Dorsey’s impassioned plea.

For an informative video on Finnell, check this out on PBS and for some great photos, click here.

Book coming: This fall, DUST BETWEEN the STITCHES will be published. The author, Cleo Lampos, writes historical fiction that creates characters true to the times.