Hobos. Not bums. Not tramps. Hobos.

A 17-year-old kid like Gene Wadsworth who caught his first freight train on a winter’s night in 1932. The pain of being orphaned at age 11 followed him to his uncle’s house in Idaho where five other children needed feeding. Like many of the two million plus hobos, Gene joined those men traveling the country, seeking daily jobs that promised a meal. 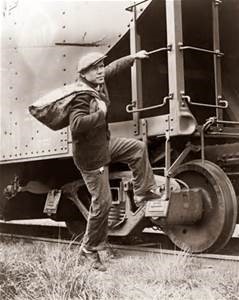 Hobo hopping a freight train in 1935

Or an 18 year old graduate of high school who tearfully left his family in Duluth because he realized the burden he added to the daily scrounging for food. Leslie E. Paul became a man at a young age.

The same story drove Henry Kuezur to leave his East Chicago home in 1932. One less mouth to feed in a family of eight children. His unemployed father supplied only enough for potato soup at each meal. Henry heard of work in California where nobody starved, and took to the rails. 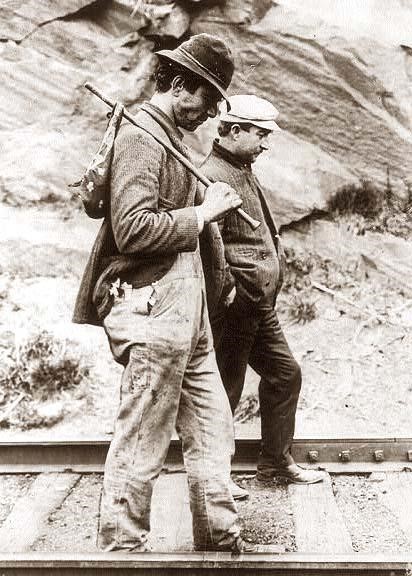 As unemployment skyrocketed in the Great Depression, husbands left families with relatives in a search for work. Some found employment and sent back some money. Others didn’t. But most rode the trains as hobos: those who hoped someday to be Homeward Bound.

Hobo life proved to be dangerous. Jumping onto a train meant accidents. If caught trying to hop a ride on a freight, a hobo faced a night in jail or a beating by the club wielding railroad yard men. Over 6,500 hoboes were killed in one year by misfortune or railroad guards. Starvation, disease and despair trailed after each hobo like burrs on a dog’s tail. 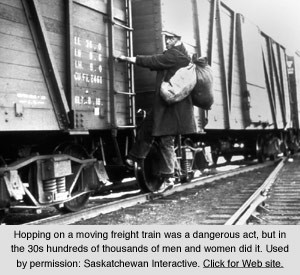 Hoboes sought work. Tramps only worked if forced by police. Bums never worked. Every hobo had a trade: shoe repair, making wire fruit bowls, hoeing a garden, playing music. They tried to make spare change by furnishing a service like chopping wood. Many found migratory worker jobs that paid per diem, but necessitated moving on. 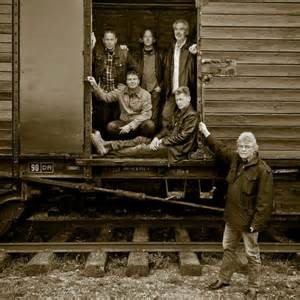 The center of hobo life was the camp located near the railroads and a water supply. There were strict rules imposed on those who gathered around the campfires. Older men protected the teens from predators. They shared food, advice, and memories with each other, and helped the vulnerable. Camp justice proved to be a reason to behave in a civil manner.

Although no real names were used by hobos, nicknames identified features of their lives. Oklahoma Slim, Box Car Willie, North Bank Fred. Some men who later became household names found themselves in the hobo jungles. Louis L’Amour, Jack London, Jack Kerouac, Art Linkletter, Eric Sevareid, Jack Dempsy, Carol Sandburg, and Woody Guthrie. The journey to a paying job led many of these men onto paths of compassion and determination.

Hobos put life into sharp perspective. Life was fleeting. It could pull up short on anybody. The people of the Dust Bowl lived with uncertainty, and had to hunker together to survive. On their train rides, these men longed for only one thing: better times that would propel them home. Homeward Bound. A hobo.

Woody Guthrie, famous for his gritty Oklahoma style guitar music, traveled on the hobo express from town to town before making his way to California. As a result of singing in hobo camps, seeing the opportunities and challenges of the Great Depression up close, he wrote a song that we love today. “THIS LAND IS MY LAND”.

In the fall of 2016, an historic novel based on the Dust Bowl will be published. Dust Between the Stitches is a researched fiction account of one family’s struggle to survive the Great Depression in the epicenter of the Dust Bowl. Cleo Lampos invites those who love a great story based on history to read this upcoming novel.