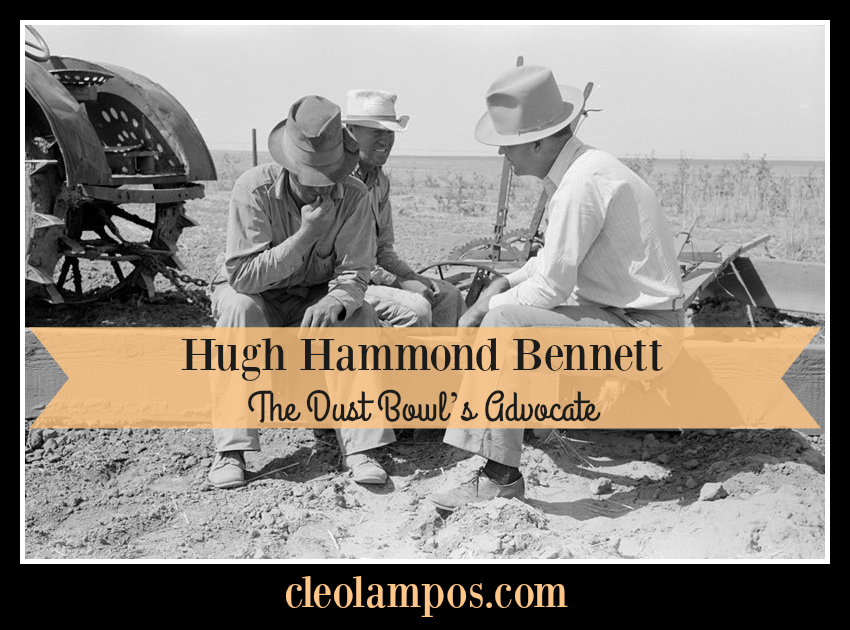 Who grows up wanting to be a soil surveyor? What is a soil surveyor, anyway? Hugh Bennett, that’s who. A man who classifies soil types and decides the vegetation and land use patterns for certain areas of land. The exact person needed during the 1930’s in the Great Plains as topsoil blew away by the ton.

A Boy and His Dirt

In 1881, Hugh Hammond Bennett was born in North Carolina on his father’s cotton farm. The agriculture practice of planting tobacco or cotton every year for decades had depleted the soil and decreased profits. Hugh roamed his family’s acreage, observing the soil erosion year after year but not hearing any explanations about prevention. Bennett graduated from the University of North Carolina in 1902 as a soil surveyor and found a job in the United States Government. This allowed him to travel to other countries where he studied soil. He learned the differences between marginal rainfall and crop production. He learned how tropical humidity effected plants. He noticed the woods, forests, pastures, wildlife and the interconnections between them. Excited about his newfound knowledge, he wrote publications, but received little public response.

As Bennett served in the Southwest in the late 1920’s, he decided soil erosion was becoming a serious crisis. The farmers laughed at him when he decried their straight row planting on land with marginal rainfall. Then the rains stopped. Crops failed. Worse, the topsoil rose from the ground in vast dust storms, stripping the land of fertile ground. President Roosevelt appointed Bennett as head of the Soil Erosion Service in 1933. His job: teach the farmers new agricultural techniques. The farmers balked. The Great Plains threatened to become the new Sahara Desert.

Dynamic Duo of the Dust

Bennett needed help, and he knew the right person. A young man who caught his attention. A conservationist like himself who had also published articles about soil erosion. An agronomist who worked quietly with pioneering methods to combat the loss of Oklahoma topsoil. Bennett contacted Henry Finnell and offered him the job of living in the epicenter of the drought. Bennet sighed in relief as the quiet Finnell set up shop in Region Six, Operation Dustbowl. He gave him full authority to create demonstration farms, plant shelterbelts and bulldoze piles of dust. Together, Finnell and Bennett visited hundreds of farmers and talked to them about how to work the land in a different way. In 1935, just as they made a sliver of progress, the funding dried up like the plains surrounding them. Congress needed the money for the Great Depression out East. Who cared if a few grain farmers went under?

Bennett and the D.C. Storm

As head of Soil Conservation Service, Bennett was called to Washington, DC to defend his work before a Congressional subcommittee. Knowing he left his work in the capable hands of Finnell, he traveled to the nation’s capital. Having lived for years in the midst of swirling dust storms, his internal radar blipped on. He went with his instincts and arrived at the Congress on the appointed day, March 21. Bennett had the floor and every ear of the Congress. The air around Bennett bristled from anticipation as well as barometric changes. Familiar, but subtle, dynamics that coincided with a huge dust storm that had kicked up in the Midwest and roiled east. Bennett explained with charts and statistics for hours about how the bill, HR 7054, would stop the blowing away of America’s topsoil. The nodding heads and yawning Congressmen signaled boredom, but Bennett knew the signs of the Black Blizzards, so he droned on. Soon the sky grew overcast. Light in Congress dimmed. Everyone stared at the windows as a dust storm rolled over the building. Thick black clouds. Air heavy with grit that irritated the dignitaries’ throats and noses. Darkness.

In a dramatic gesture, Bennett raised his hand and sighed. “Gentlemen. This is what I have been talking about.” The bill passed. Less than a month later, April 14, 1935, the Dust Bowl experienced the most frightening dust storm ever on what was dubbed, “Black Sunday.”

Picure by Arthur Rothenstein for the WPA National Archives

Two men who loved to learn about nature as children team up as soil surveyors to reverse the greatest man-made natural disaster on this continent:  Hugh Bennett and Henry Finnell.

Black Sunday brought the most frightening of all the Black Blizzards. Among those who huddled in shelters was a 22-year-old songwriter in a small house in Texas just south of No Man’s Land. He described the event. “We watched the dust storm come up, like the Red Sea closing in on the Israel children. We sat in a little room and you couldn’t see your hand before your face. People said, ‘This is the end of the world.’ Everyone replied, ‘So long, it’s been good to know you.’” Woody Guthrie wrote his iconic song, So Long, It’s Been Good to Know You. As poverty-stricken people migrated to California, this is the tune that others sang to send them on their way.  Read the words of the song and imagine sitting at a table in complete darkness during the day.

Book coming: This fall, DUST BETWEEN the STITCHES will be published. The author, Cleo Lampos, writes historical fiction that creates characters true to the times.