“Trust in what you love, continue to do it, and it will take you where you need to go.”   -Natalie Goldberg

Remember learning about the Hierarchy of Needs developed by a psychologist named Abraham Maslow? As a college student with a bent for creativity, it bothered me when Maslow predicted that most people would never get to the top of the pyramid. Never self-actualize. Only one percent of the population, according to Maslow. That was the singular flaw in his theory, I have decided.

Let’s get a rotary blade and fussy-cut his pyramid. Then piece together the real data. 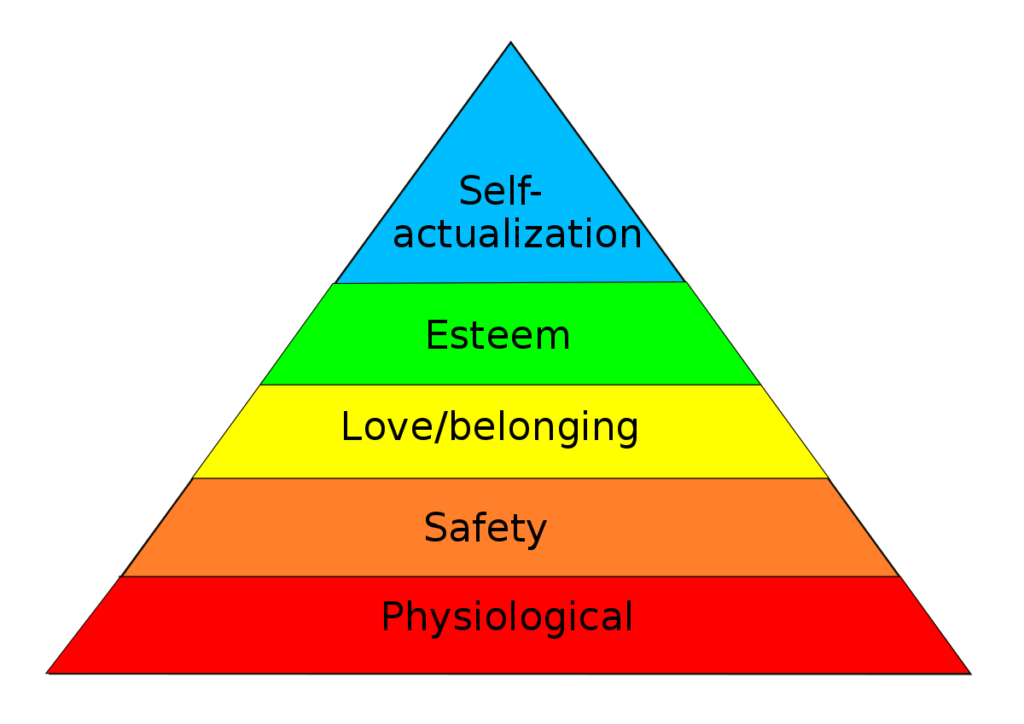 This slice is the largest, and the base of the pyramid. All other levels depend upon needs met right here. According to Maslow’s theory, the lowest tier is the quest for physiological needs: food, water, warmth and rest. Life becomes stressful and tiresome if these needs are not satisfied. True, most Americans have these basics met in their life, except for the amount of sleep. So, moving to the next level for the average quilter is fairly easy. No need to be held back. Rev up those sewing machines and let the free motion stitching begin.

But what about those men and women who created incredible pieces of quilting even when these rudimentary requirements for living were only sketchily met? For example, the exquisite works of art that emerged from the Japanese Internment Camps here in the United States when few physiological needs were met. The Art of Gaman is a Japanese concept that means “to bear the seemingly unbearable with dignity and patience”. In bleak camps where basic physical needs were minimally supplied, these artisans beautified their surroundings. They utilized used scraps and found materials to create simple comforts and enable emotional survival. Beauty helped them through deprivation. With needle and thread, the women of the intern camps stitched together works of art from fragments that those on the self-actualizing level of Maslow’s pyramid admire.

The human spirit is remarkable.

The second piece of the pyramid joins the first because both concern the safety of the individual. Level two represents security in the areas of financial needs, health, and freedom from fear. In theory, if these deficits are present, the quilter is stymied into inaction. But that is not what history reveals. The Seminole Indian tribe did not enjoy life on Maslow’s first nor second level. Yet, the women created a unique and specialized type of string patchwork quilting that yielded amazing designs. Their circumstances of deprivation and insecure living conditions persisted even as their sewing machines hummed a tune of hope. In their desperation, the fabrics of life were stitched together in spite of circumstances. Eventually, these sewists moved upward on Maslow’s pyramid in spirit, not necessarily in reality. 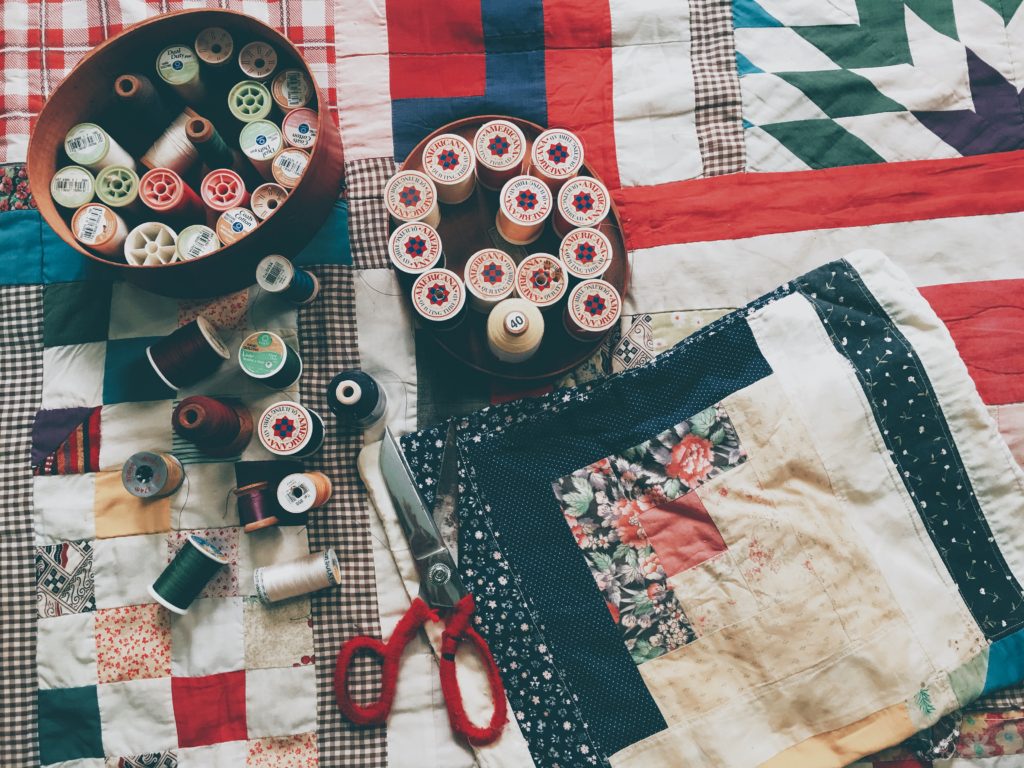 A blanket stitch binds level three to the first two pieces. The feeling of love threads this middle level of the pyramid with a sense of belonging. Connection is why the pioneer women conducted quilting bees. Or the folks in the Dust Bowl hosted Snack and Swap parties for feed sack exchanges. It explains the gathering of Amish women around an unfinished quilt, children at their knees threading needles. Quilting weaves connectedness into fragmented and frayed lives. The friendly action of sewing together binds our hearts in love and relationship. Maslow might have been surprised to learn that this level of connective need can be met in spite of deficits in levels one and two.

With the back-stitch securing the basting of the needle, level four provides security to the seamstress. On level four, the goal is to master the craft and receive recognition for finished work. Respect is one of the results from the hard work of gaining knowledge, being curious, and striving for beauty, form and balance in both life and in quilting. When one considers the plight of the Gee’s Bend Quilters, the eventual recognition of their priceless contribution to the art of quilting is soul-searching. These avid creators of unique patchwork toiled for years with only local acclaim. Their faith provided the dignity and self-esteem that they needed before the world noticed the singular contribution of their stitchery. Their own deep desire for beauty and creativity propelled them to piece from the depravity that surrounded them. Did Maslow meet people with such inner strength?

The last piece of the pyramid only needs a few binding stitches and a tight knot. At the peak, a quilter is motivated to create beyond their personal self. These are the people who are highly creative, try new things, work hard, and desire to achieve all that they are capable of becoming. It is from this group that the quilters for Quilts of Valor, charities, memorials, new babies, or homeless are recruited. They become teachers to new generations of quilters, passing along their skills and creative insights to novice “needle and threaders”. Self-actualized individuals know who they are, what skills they possess, and find a calling in life to satisfy their inner cravings of self-expression. 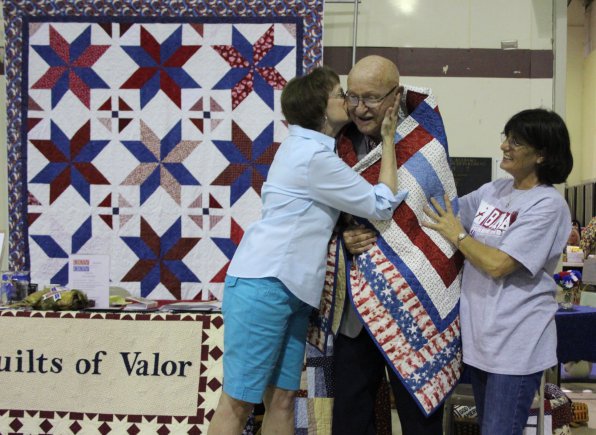 My feeling is that more than one percent of the population fits into the self-actualizing category. Maslow was wrong.

“Art is an act of the soul, not the intellect. When we are dealing with people’s dreams- their visions, really- we are in the realm of the sacred. We are involved with forces and energies larger than our own. We are engaged in a sacred transaction of which we know only a little: the shadow, not the shape.”

On Facebook, the question was posted: Why do you quilt?

The top four answers in order of number of responses: