Meet the Quilters of WW2

“Without the aid of home front women warriors, maintaining the needs of the country and the military during the war would have been impossible.”   – Sue Reich

The call for quilts to help in the war effort fell onto the ears of many on the home front who knew how to wield scissors, thread and needle. The grandmothers of the men enlisting in the military had spent a life time volunteering to improve the quality of life in America. These silver haired stitchers were born in the aftermath of the Civil War, experiencing childhood in the reconstruction of the South or the height of the industrial revolution of the North East. Their husbands may have served with Teddy Roosevelt’s Rough Riders or helped to dig the Panama Canal. Their sons deployed to Europe during the Great War, returning with physical and emotional challenges. After marching in parades as Suffragettes, these quilters faced the deprivations of the Great Depression. Now their grandsons trooped to the Pacific and European Theatres. 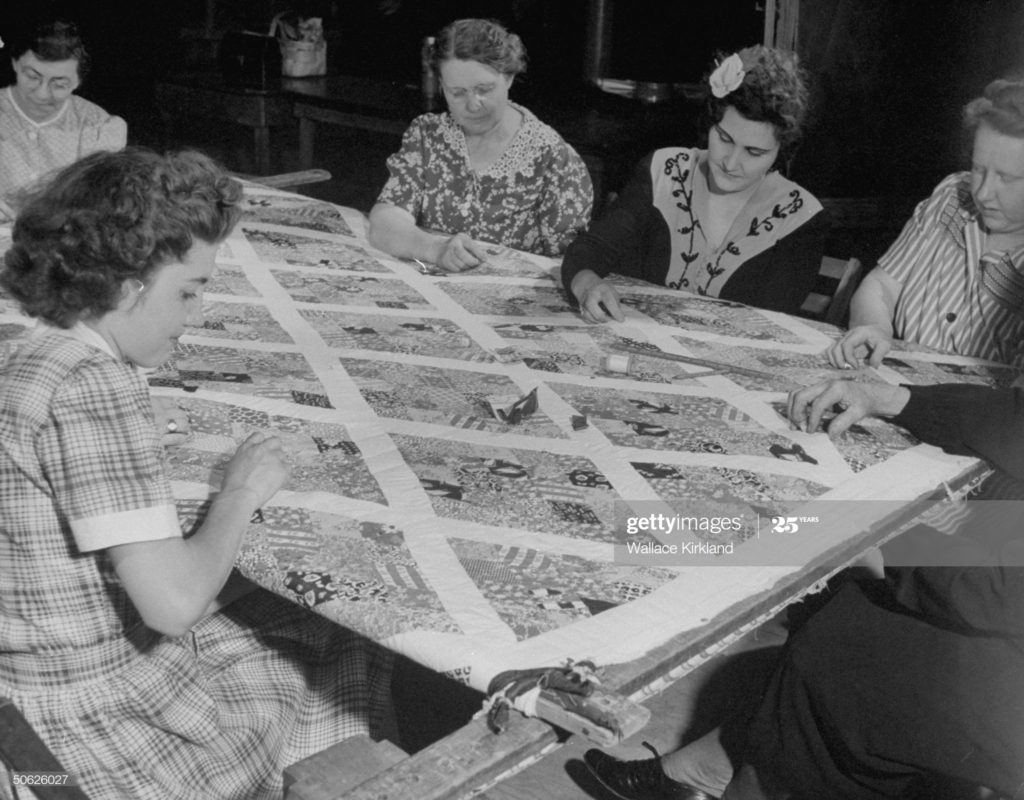 Nobody quilted with the experienced hand of these grandmothers. The years taught the voting housewives to scavenger scrap fabrics, cut old cloth into usable patches, and gather together in a community to strengthen each other’s resolve.  “Some hearts and minds never grow old, but continue to spread good will along life’s way, never tiring, never failing,” states Sue Reich.

The grandmothers of America created well-constructed quilts to give to the Red Cross, festooned with airplanes and other patriotic symbols.  Collecting woolen patches, they created warm, comfy quilts for the air raid shelters in Great Britain. Needles pressed into cloth, grandmothers shared organic tea. The 60-90 year olds utilized the skills honed from a lifetime of quilting into war time productivity. 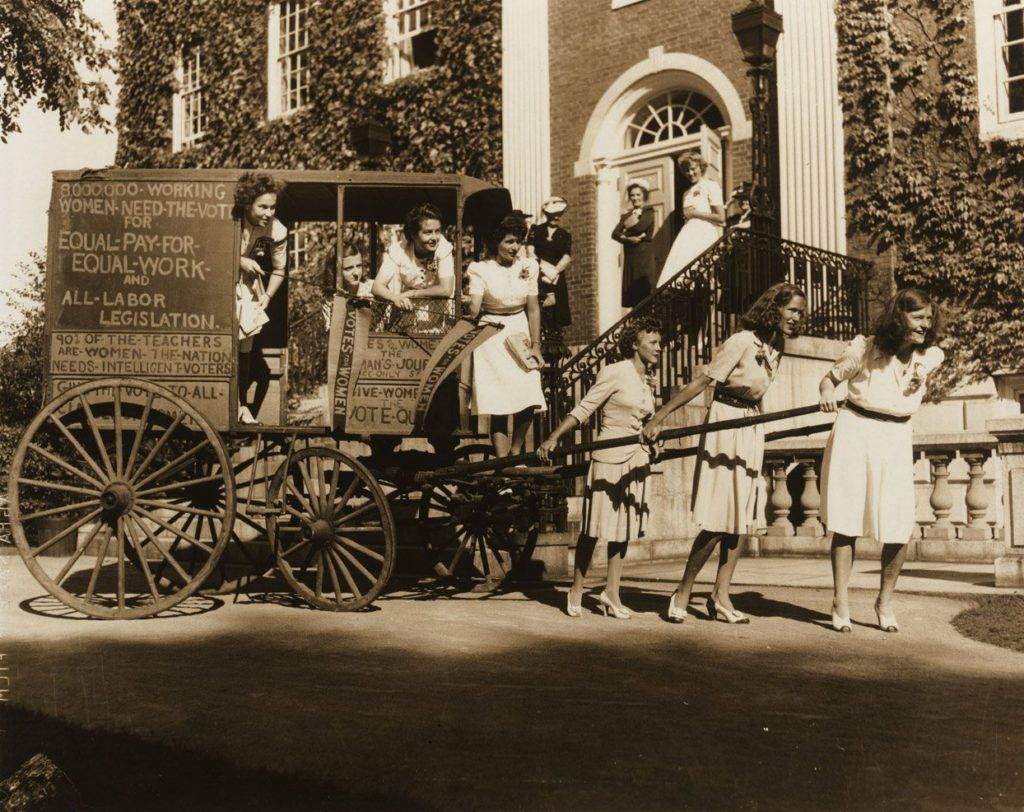 Founding of the Woman’s Rights Collection at Radcliffe College, August 20, 1943; students pulling a cart from which suffragists had sold The Women’s Journal. Courtesy of the Schlesinger Library, Radcliffe Institute for Advanced Study, Harvard University.

The mothers of the men who enlisted for service became the mainstay of the Red Cross workers and the American Legion. The bulk of the WWII quilts were stitched by these women. With black, blue and gold stars in their windows,  mothers of GI’s stitched in meditative solace, stitching their anxiety into fabric. Born between 1890 and 1920, their lives began in peace and prosperity. Newlyweds during WWI, these young brides stayed stateside as husbands and brothers fought the War to End All Wars. The world changed before their eyes: electricity, telephone, indoor plumbing, and airplanes. Then the economy dropped, and these mothers learned to sacrifice dreams for daily bread as the Great Depression took its toll on America. When their sons deployed, their fingers moved swiftly as they quilted comforters to be sent to the troops, wounded soldiers, or military hospitals. This war was personal.

C.H. Longenecker, Country Red Cross Chairman, must have met these quilters. He stated, “Women are never more glamorous than when doing voluntary work.” 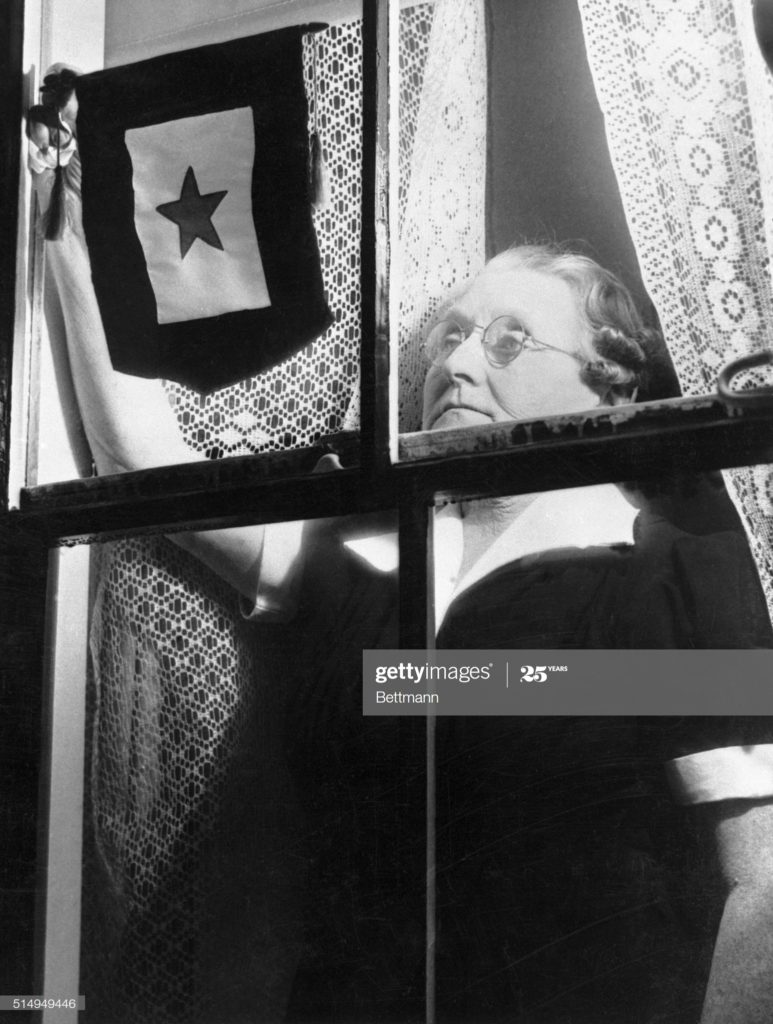 Mrs. John Gagne of Lynn, proudly places the gold star service flag in the window in her home, following the news of the death of her son, a member of the U.S. Army Corps, who was killed in action during a bombing of Hickam Field in Hawaii, by Japanese bombers. She is the first Gold Star Mother in this city in World War II. (Getty Images) 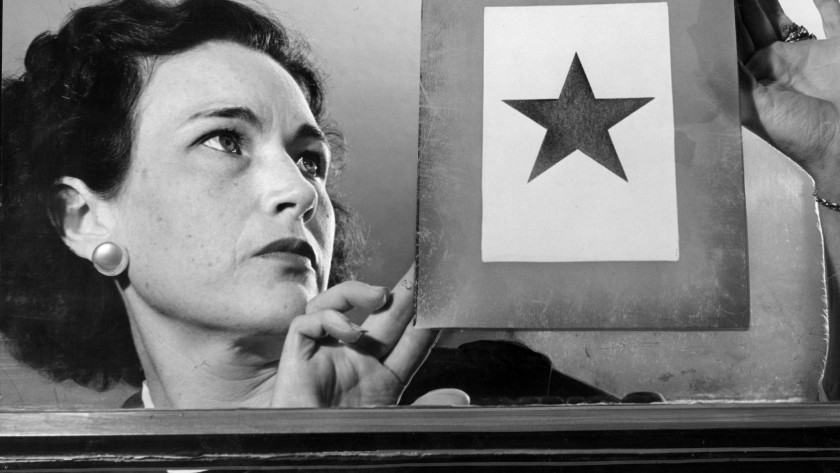 Thelma England of Alhambra places a gold-star flag in her window to acknowledge her son, Ensign John C. England, who died in the attack on Pearl Harbor in World War II. (Los Angeles Times)

The wives of the enlisted men in WWII had been born 1915 and 1925. They grew up during the Roaring Twenties, then plunged to the depths of the Great Depression. When the war started this group of women left home as 20 to 40 year olds to take jobs in the work force, defense industries, or other jobs previously held by men. They gained confidence driving ambulances, flying airplanes, and living away from home. They learned how to earn a living for themselves and their children, no longer believing in fairy tales, princess weddings or happily ever after. Many married at the Justice of the Peace just before the groom deployed to parts unknown. They quilted as a way to fill the lonely nights and try to piece together a fragmented life. 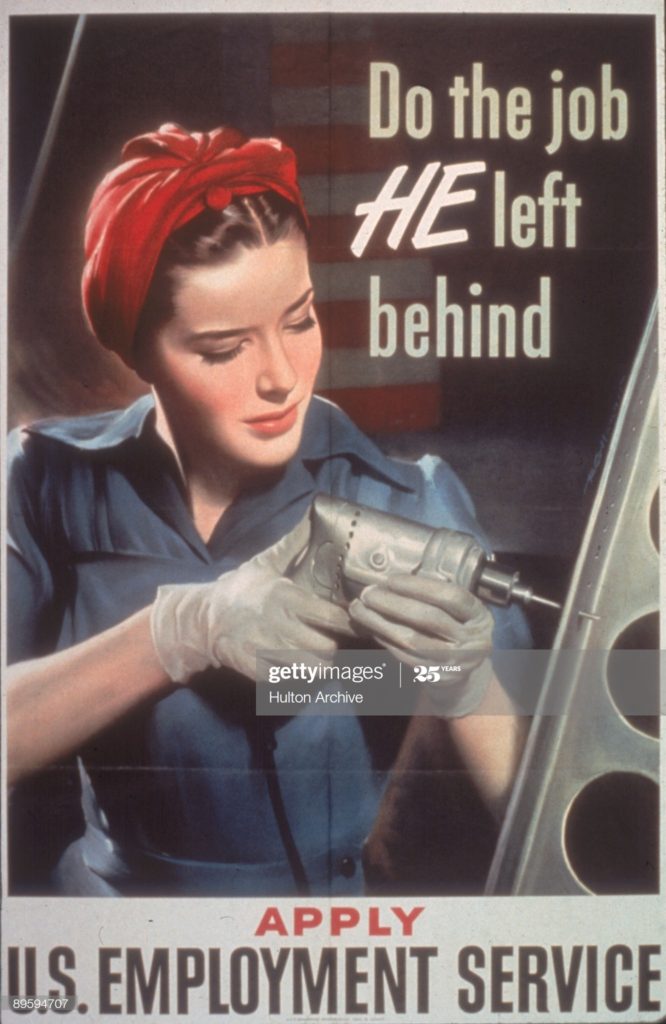 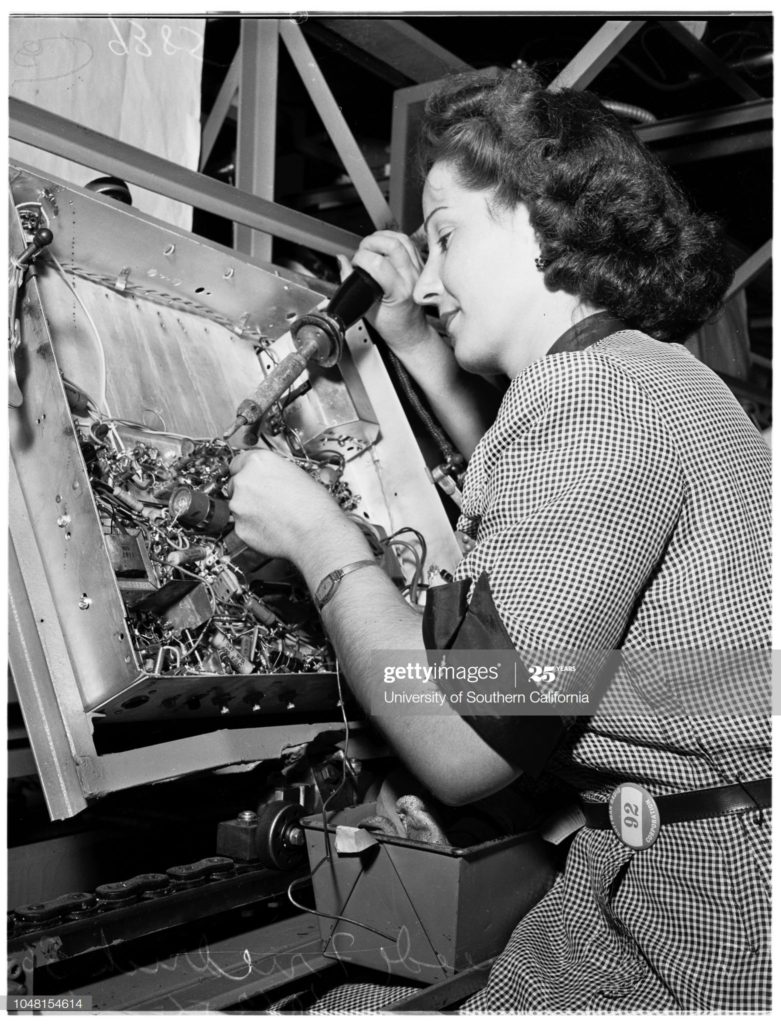 Even the country’s youth picked up the needle and thread. Raised during the Great Depression, these youngsters never knew prosperity. The frugal living rules always applied. They found contentment listening to the fireside chats of FDR on radio, war reports from the Pacific and Europe, and their favorite comedy shows. Blackout curtains, darkened homes at night, and unheated sleeping quarters were commonplace. During the day, they collected cigarette wrappers, tin cans and metal scraps for the war effort. The boys enlisted at age 18.

But the girls kept on quilting. In primary school, the youngsters knitted and sewed to raise money for war bonds. In high school, interested students were permitted to leave school to search for enemy aircraft. The girls studied the booklets and charts that identified the planes. It should be no surprise that some of their quilts boasted appliqued aircraft silhouettes of war machines. Their quilts filled the boxes sent to Bundles for Britain, as well as the Red Cross.

A nation of sew-ers. Each doing their part to win the war. General Dwight D. Eisenhower, commander of U.S. forces in Europe praised the WAC (Women’s Army Corps) with these words. “They have met every test and task assigned to them…their contributions in efficiency, skill, spirit and determination are immeasurable.”

With no stretch of the imagination, that remark also rests upon the women on the home front who labored long hours to bring the comfort of quilts to refugees, air raid shelters, orphaned children and the nation’s own military.

A hearty salute to the quilters.

“Sewing is a way to mark our existence on cloth; patterning our place in the world, voicing our identity, sharing something of ourselves with others and leaving the indelible evidence of our presence in stitches held fast by our touch.”  – Clare Hunter, Threads of Life